Here is a map which I created for a contest.

Normaly the contest should be ended, but an extension of time was brought. That's why I post here to improve this little map with your comments, suggestions...

The aim of the contest was to build a little aim_ type map, but an aim map without orange textures.

There is still a lot of work to make. Indeed in this b1 you can see a lot of thing that i will correct for the b2 such as :
-the minimap
-optimisation
-reduce the weight of the map (~40mo)
-gameplay (not many covers... and the middle is very empty)
-cliping of some zones
-roofs 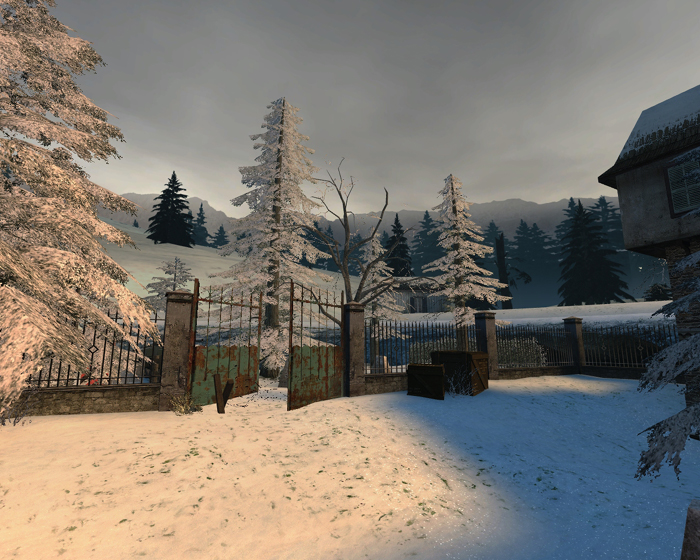 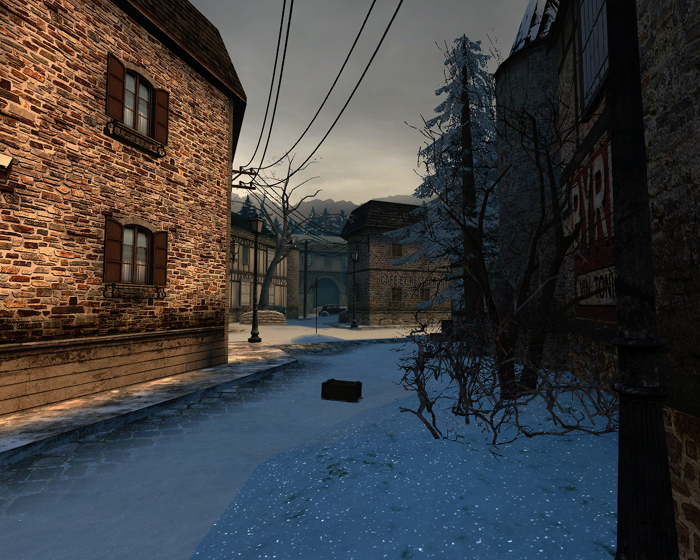 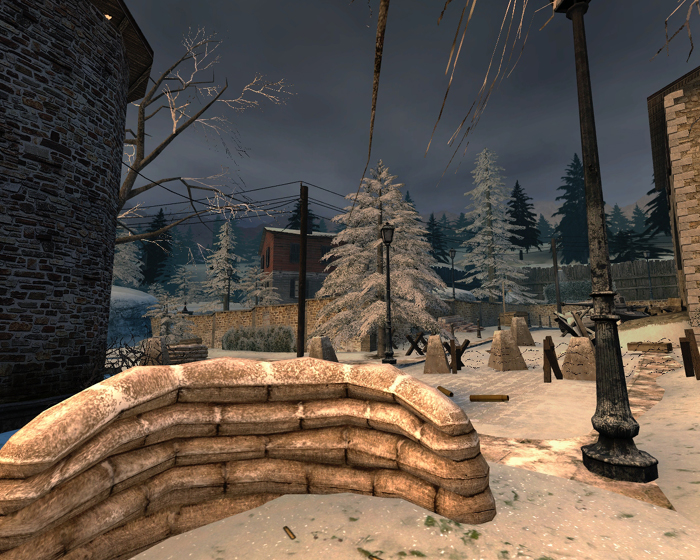 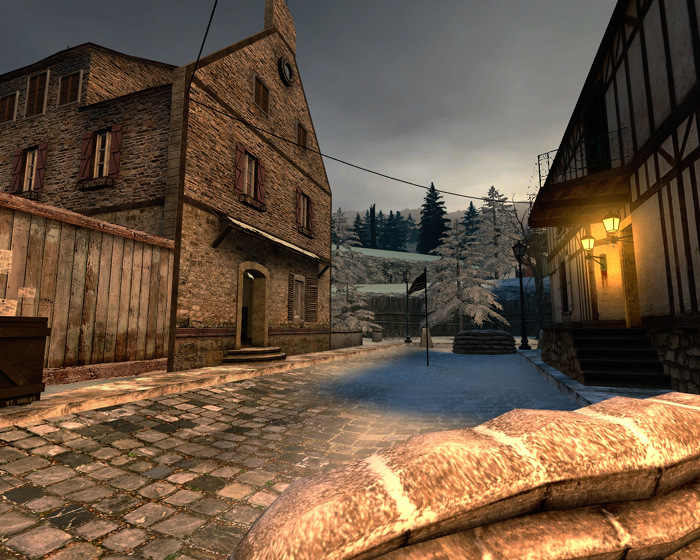 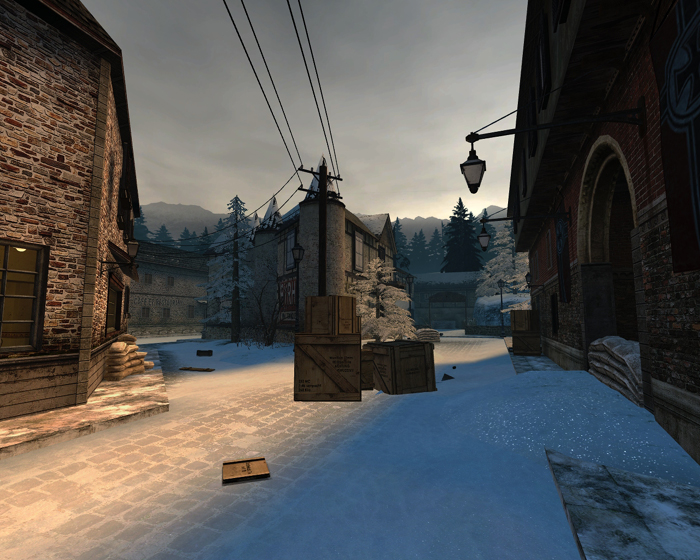 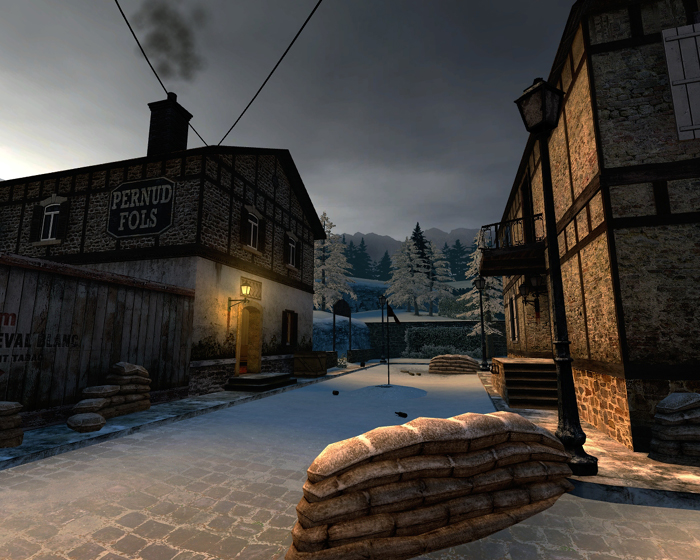 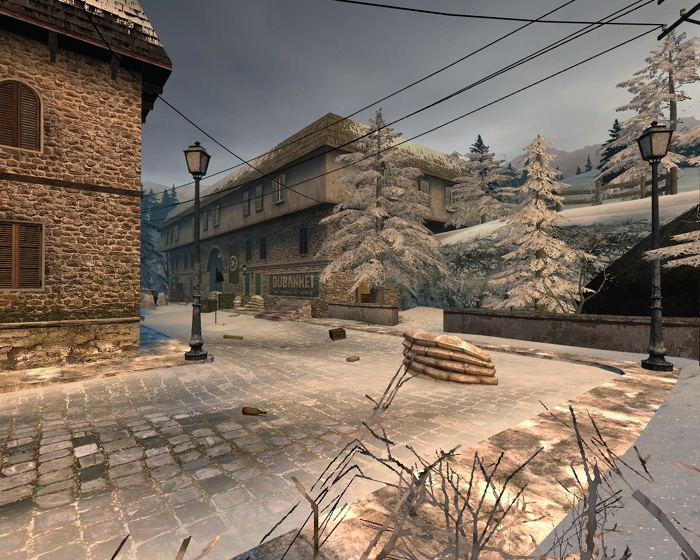 But i will release the b2 before the end of the contest (January 15th). :)
Ol' Noodle Head
OK. Well, we will still use this one for our SnowDay weekend celebration.
B@D
Looks good man we will give it a run on our custom map server tonight thanks .....
Fr3t
Don't forget your coat ! It's a fast & furious gameplay but with a reallly good layout.

A topic will be open later in order to introduce to you all the candidates and the winner.
Pvt.Snail
Thanks Grippy! Will be definitely waiting for b2. Cheers.
Enemy1
Great map !
We have it on 2 off our main servers and its running great !
We were 10 players and we had no problems with fps or lagg :)

The only thing almost all said was that its close between the flags and that 1, 2 or 3 should be 2 caps !
Formologic23
I agree, this map needs (2) 2 man caps, preferably on the far left and right side. It would help slow the gameplay down a little bit. The middle should stay a 1 man cap because it's in the open and little, if any, cover.
B@D
Only problems I had with it was sniping from spawn exit to spawn exit right down the middle that sucks ass getting shot while still in your spawn .
And several people complained about low fps I only has 20-30 in most areas and i run a 2.2 amd with a 7800gs ,1 gig of ram .
Grippy
Thanks all for comments!

For the b2, the middle flag will be a 2 mans cap with a time to cap of 5sec.
The right and left flags, will have a longer time to cap, but will still 1 man cap.

I will try to add more cover at the middle so it will be more difficult to snipers to kill when you exit the spawn. But there is 2 others spawn exit.

B@D, can you be more precise on which zones you got low fps ?

Thanks to all!
Formologic23
For the b2, the middle flag will be a 2 mans cap with a time to cap of 5sec.
The right and left flags, will have a longer time to cap, but will still 1 man cap.

I don't think this is such a great idea, because there is no cover. Unless you provide enough cover, which may not even be enough since you can see spawn to spawn, no one is going to be able to hold or cap that middle flag.

If you moved spawn exits from the middle to the left and right of the middle, it may work better.

Good luck on b2.
Grippy
Here is an Hammer screen of what the middle will look.

The gameplay was fast and furious and was similar to Neutrino's "dod_aura" in CAMP2. Fun and fast map. Still one of my favs.

Keep up the good work!
HuXx
Really enjoyed the way this map plays.
Glad your sorting the middle, rocket nades from spawn exit to spawn exit gets a little tiring :p
Look forward to your update.
Grippy
Thanks :)

Here is some screenshots of what the middle will look :

Don't know if i made the map compatible with the HDR. Because the sky weight 16mo for 6 textures in this mod.
|TCO| ZoSo
That looks badass.
zonetrooper5
Jesus them screenshots look sick, sweet lighting. God lighting can help make a map look so good.
piu piu
it looks really really good!

it's just a pity that the lower parts of the skybox are hidden behind the mountains. because that golden / orange and blue parts which one can see here (http://www.dayofdefeat.net/forums/showthread.php?t=76435) would really have fitted your lightning. maybe you can resize the skybox image or move the skybox a little bit higher?

This in an partial archive of the old Day of Defeat forums orignally hosted by Valve Software LLC.
Material has been archived for the purpose of creating a knowledge base from messages posted between 2003 and 2008.